NICU gets new cribs thanks to Huntsville Havoc and fans

Some new moms are enjoying a big gift from the Huntsville Havoc hockey organization and their fans. 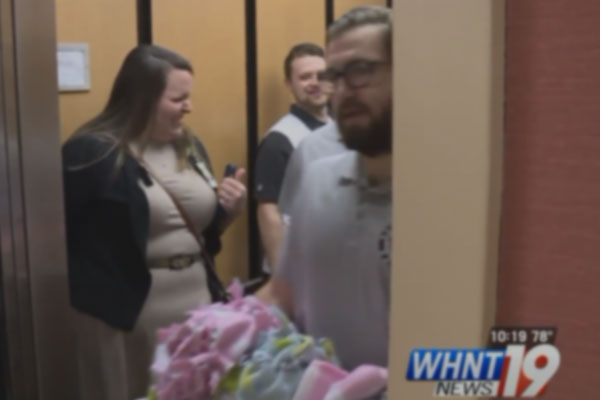 It is Mother's Day. And some new moms are enjoying a big gift from the Huntsville Havoc hockey organization and their fans. Their donations from this year’s Melissa George Night are already being put to good use.

It’s become tradition for the players to visit the Regional Neonatal Intensive Care Unit at Huntsville Hospital for Women and Children every year before Melissa George Night. The players wear special pink and blue jerseys that are auctioned off after the game. Money from that, a silent stick auction and other donations go to buy life-saving equipment through the Melissa George Neonatal Memorial Fund.

Becky Jeffries and her husband Keith own the team. “This is amazing for them to see,” she told me during the tour before this year’s event. “Sometimes they don't understand what they're playing for and coming up here and seeing these babies, they understand a little bit more of how important it is.”

This year, the Havoc organization and fans raised $61,000 to buy some much needed high-tech cribs.

“We were able to buy 14 units, which is a lot of equipment for our babies,” NICU nurse Tara Eslick told me. And those cribs are a big improvement over the older ones being used. “They raise and lower so for a mom that comes in a wheelchair, they can lower more to her level,” Tara said.

She showed the guys around unit when they visited earlier this year. “We are very grateful for the fund and we do love when the players come up here,” she said. “It is so exciting to see them witness what they are directly purchasing or helping purchase through their fund-raising event.”

The boys get to see the fruits of their labor on and off the ice “They were able to talk with the families,” Tara said. “We were able to point out multiple pieces of equipment that the fund had purchased so they’re able to see what their hard work that night is allowing us to get.”

And nobody appreciates it more than those new parents. “They were using one of the older cribs and got to see their baby change to one of these and it was very exciting,” Tara said. “I remember the first family we changed to, they were so excited to get to try out the new Cadillac as they called it.” We both laughed.

The cribs aren’t cheap. They cost $3,000 each. But they’re needed more than ever. “You look around and every one of the ones we currently have are in use,” Tara added. But there’s more. Chris and Amy George who established the fund in memory of their daughter Melissa who died shortly after birth, had 11 more cribs delivered to the NICU thanks to donations to Melissa’s fund. So there are now 25 new cribs in use.

In the 12 years the Huntsville Havoc hockey organization has hosted Melissa George Night, the team and fans have raised almost $600,000 for the Melissa George Neonatal Memorial Fund. They’ll do it again next season!