One family who benefited from life-saving equipment funded by the Miracle Bash and Swim for Melissa is in the fight to help save those tiny little miracles. 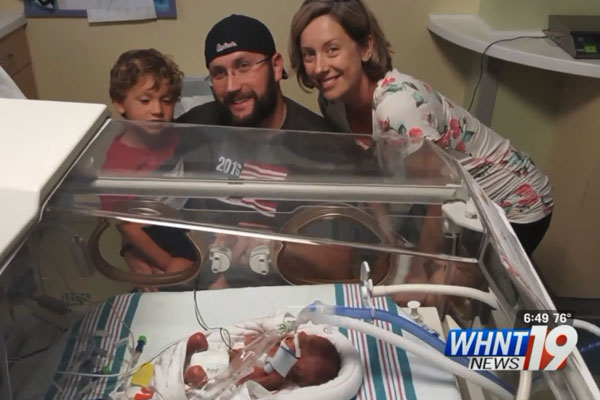 The 13th annual Miracle Bash and Swim for Melissa are coming up Friday and Saturday. The events raise money for the Melissa George Neonatal Memorial Fund. That money is used to support the Regional Neonatal Intensive Care Unit at Huntsville Hospital for Women and Children.

One family who benefited from some of that life-saving equipment is in the fight to help save those tiny little miracles.

“Our first child came full term, so we expected this to be the same,” Jes Baldridge said while holding her youngest son, Adrian Burke. “Didn't have any indication anything was wrong and so I was very scared.”

His delivery was not normal.

“The C-section is finished. I’m holding Jes’ hand, and we hear the baby cry,” Chris Baldridge said. “Then they start packing him up, getting him ready to move and put him in the isolette and then he's gone and then the OR is just silent.”

Their son was rushed from Madison to Huntsville.

Every second counted if he was to survive.

“At that point, everything changed to a 15 percent chance to live,” Chris said. “Okay, are we going to give him a name in case he doesn't make it?”

They were not expecting to take this journey. “I did hear him cry once, but I didn't see before he was gone,” Jes remembers. For the next few days, all Jes had of her little boy was a picture Chris sent her.

“It was difficult to be separated from him,” she said.

“I already knew that the NICU team in Huntsville was really good and I was glad that he was able to be there and that it wasn't so far away,” Jes said. The very first piece of equipment Chris and Amy George bought from Melissa’s fund helped save A.B.’s life.

“The Voyager Isolette is the only thing that kept Adrian alive from Madison to Huntsville,” Chris Baldridge said. “At 23 weeks, you can't survive on your own.”

That’s why money from this year’s Miracle Bash and Swim for Melissa will be used to buy another isolette for a second Kids Care transport that will soon hit the road.

“To have that equipment that literally kept him warm, helped him breathe while he was travelling to Huntsville was huge because otherwise if we didn't have it, it would have been just a lost cause kind of thing,” Jes added. “So that's the reason he is here today.”

There are still a few tickets left for Friday’s Miracle Bash. And your child can still register for the swim Saturday. Here’s a link to the Huntsville Hospital Foundation website to get Miracle Bash tickets or make a donation.