Josh Whitehead has won the race 7 out of 11 times. Read why he is so passionate about the Liz Hurley Ribbon Run. 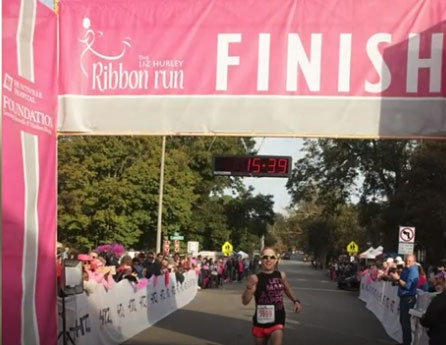 An accomplished runner who’s won several national championships is looking to come out on top again in this year’s Liz Hurley Ribbon Run!

For Josh Whitehead, the race is very special because his mom is a breast cancer survivor.

Whitehead traces his love for the sport to the Ribbon Run. It was the first race he competed in and he hasn't missed one in more than 10 years.

“My mom is a breast cancer survivor so in 2007, she had finished treatment. She’s an amazing woman. My wife had been trying to get me into running for a number of years. I had been bicycling for a decade and a half at that point. She said she heard about an event that raises awareness and funds for breast cancer research in Huntsville called the Ribbon Run and she said I should go try it. So in 2007, I did my first Ribbon Run and loved it. It was a great experience. Since then, my mom has come out and finished the race. A couple of years later, she joined us and did her first 5K here at the Ribbon Run,” he said.

Josh and his wife work for NASA. When they're not working and raising their three children, they're running.

"I've been racing competitively at the national and international level for a few years now. There's been some national championships. In 2015 and 2016, I was able to go to Nashville to compete and I managed to get the title in both of those at the Roadrunners Club of America 50K, so it's 31 miles. It was a lot of fun," Whitehead stated.

But the Ribbon Run 5K is incredibly meaningful for his family each year. He does each race in honor of his mom. After finally beginning to train for running seriously in 2009, he had his first win in 2010.

“What made that day most special was the fact my mother was there at the finish line.I haven’t missed a Ribbon Run yet,” Whitehead said. “I’ve competed 11 times and was fortunate to come away with a win seven of those 11 times.”

He hopes his story inspires others to take up running.

"It's a great way to stay fit. For folks looking for a way to get active and don't know what sport they might be interested in, I highly encourage you to look at walking and building up to running. It's something you can do as a lifestyle activity your whole life. I know runners in their late 90s and runners who are 8 and 9 like my 8-year-old. There's no age that's too old or too young to run," Josh added.

He says the Ribbon Run is a great way for people to get involved in their community and it’s for a good case, benefiting breast cancer patients from across North Alabama, providing high-tech diagnostic equipment for Huntsville Hospital and Madison Hospital Breast Centers. Join the cause by registering at www.lizhurleyribbonrun.org.

"It touches a lot of families and this is actually one of the largest running events in the entire state and it's right here in Huntsville. With it being a 5K distance, I think most people could work up to walking or running and get out and get involved in their community," Whitehead added.