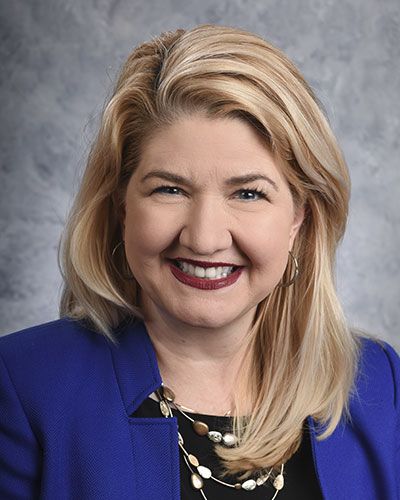 Sarah serves as the fifth Huntsville Hospital Foundation president in its history. She was born in Nashville, Tenn., and raised in Dothan, Ala. Her 31-year career has spanned banking, health care and entrepreneurship. After graduating from Auburn University with a BA in Public Relations/Speech Communications, she worked for SouthTrust Bank, Crestwood Medical Center and Leadership Huntsville/Madison County, where she served as its president/CEO for 19 years. After retiring from Leadership due to care needs for her family, she and a partner started Acair, LLC, a family contingency planning service. She also began serving as managing member of the Henderson Family, LLC, her family’s small timber/hunting business in south Alabama, after her father developed dementia, and she continues to serve in that capacity.

She currently serves on the Rotary Club of Huntsville board, the Junior League Advisory Council, and is a member of the Committee of 100, and a Junior League Sustainer. She has served on about 20 boards and committees throughout her career and as a board officer or chair for the national Association of Leadership Programs (ALP), the Community Foundation of Greater Huntsville, and Public Relations Council of Alabama (PRCA). Much of her volunteer work has been around diversity and inclusion initiatives, including Alabama Citizens for Constitutional Reform, and service on the charter committee of a local Diversity and Inclusion symposium.

She is married to Stephen Jones, a retired Huntsville Fire & Rescue captain, and she has three daughters, Jessica and Charlotte Savage, and Hope Jones. Her household also includes two dogs and two chinchillas.